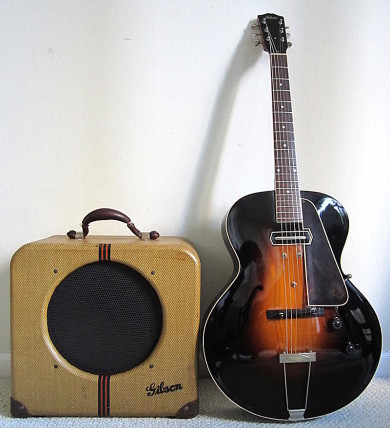 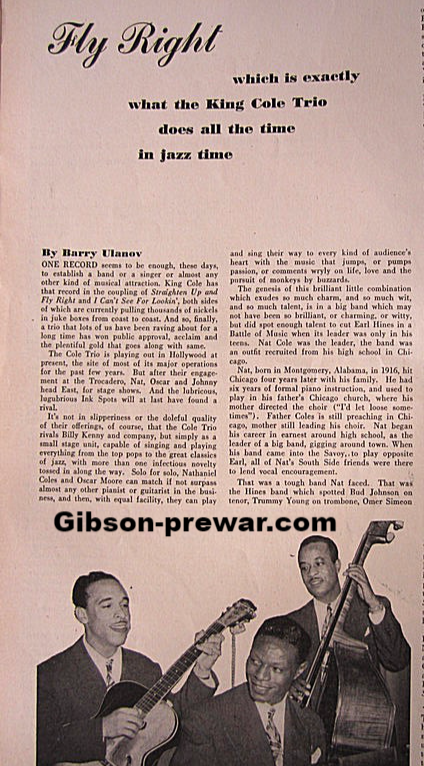 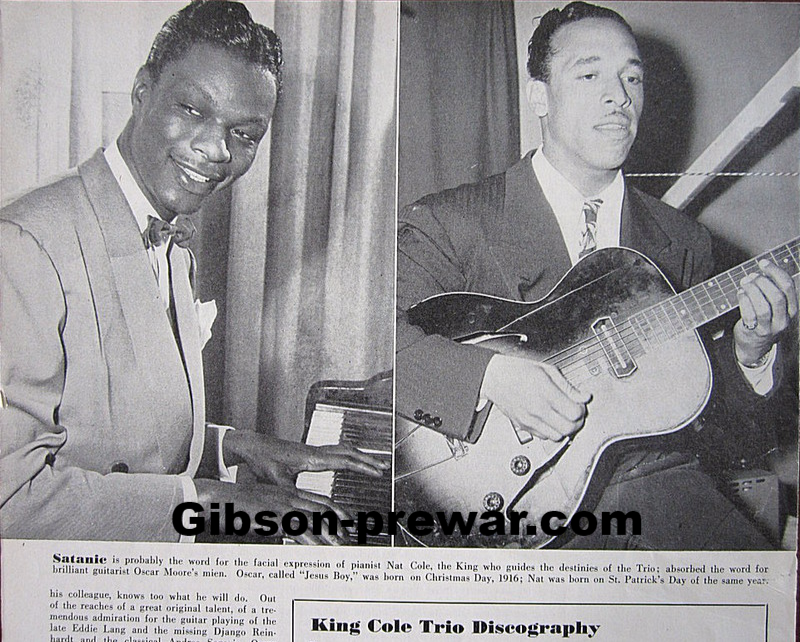 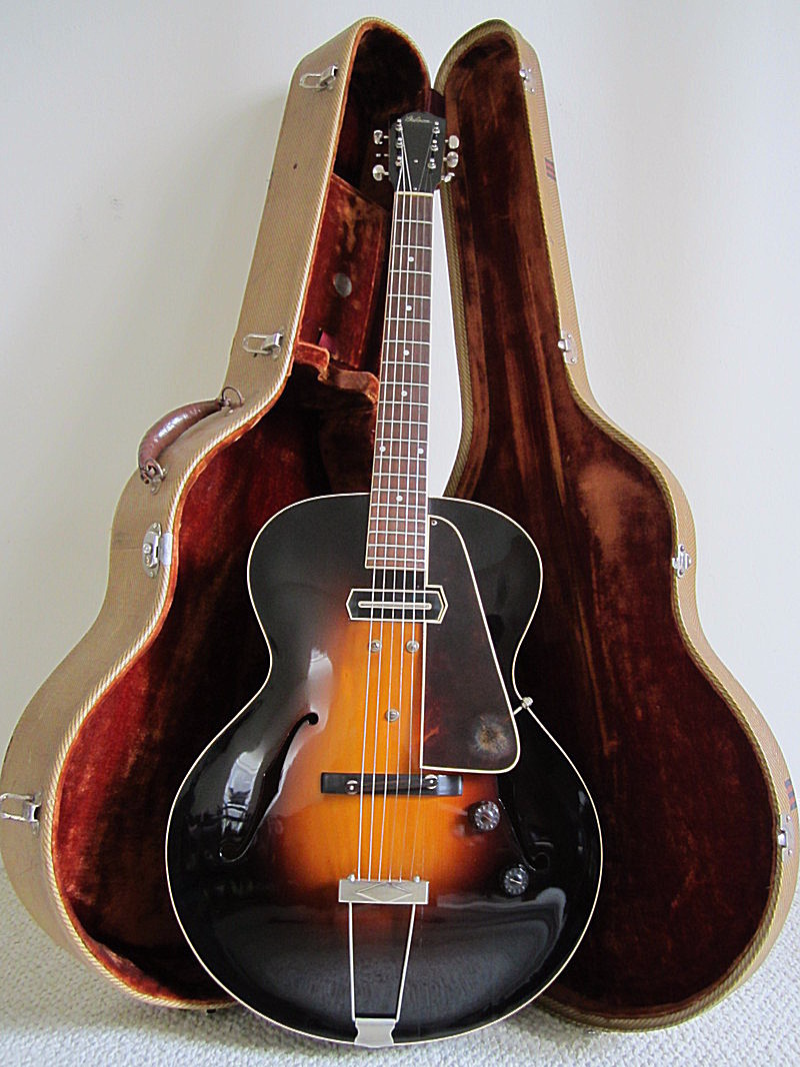 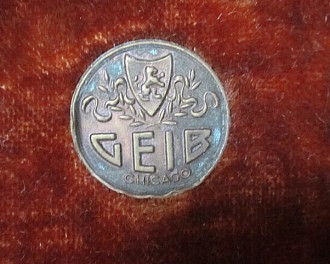 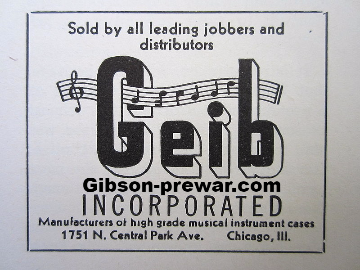 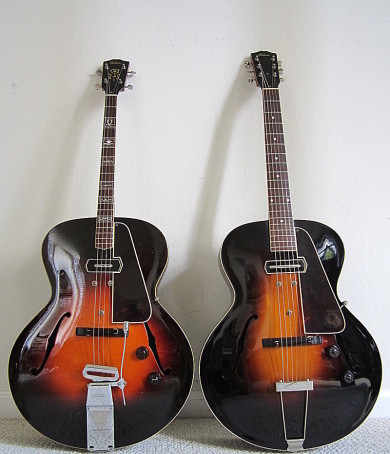 Pictured with its close relative, the ETG150, electric tenor guitar. Click the button below to check out the ETG-150.
1940 ETG 150 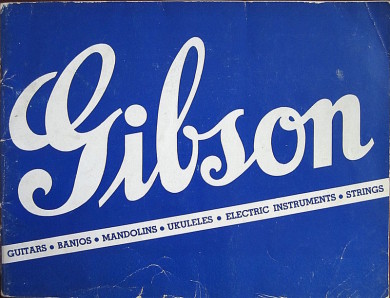 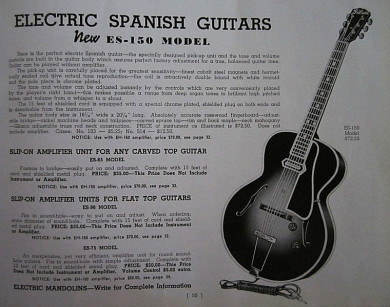 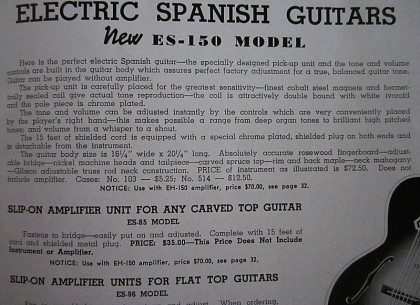 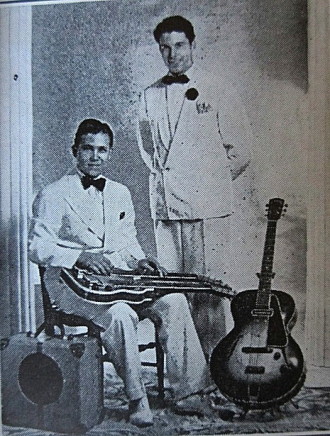 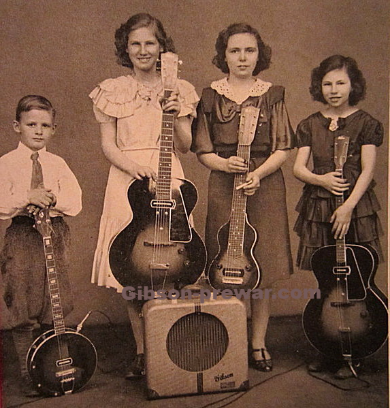 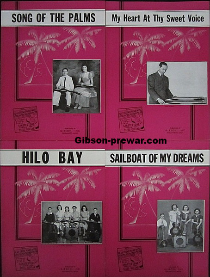 The above photo is a beautiful example of Gibson's early electrics. Along with the late '30's ES150, Gibson also made the ES100, ES250, ETG150 (electric tenor guitar), EM150 (electric mandolin), EM100, and ETB150(electric tenor banjo). Almost all of these instruments are found on this site.

The above photo comes from Gibson's Mastertone System For Steel Guitar, 1940. The system came in 4 parts with 12 pieces of sheet music lessons per part. Each part was assigned a color for varying degrees of difficulty. The colors were, peach, blue, magenta and orange. To view the learning systems, just click Gibson sheet music. 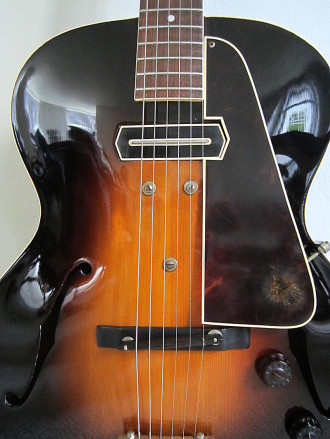 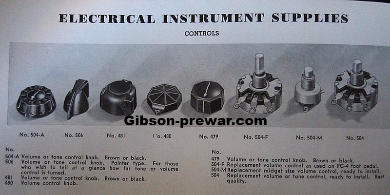 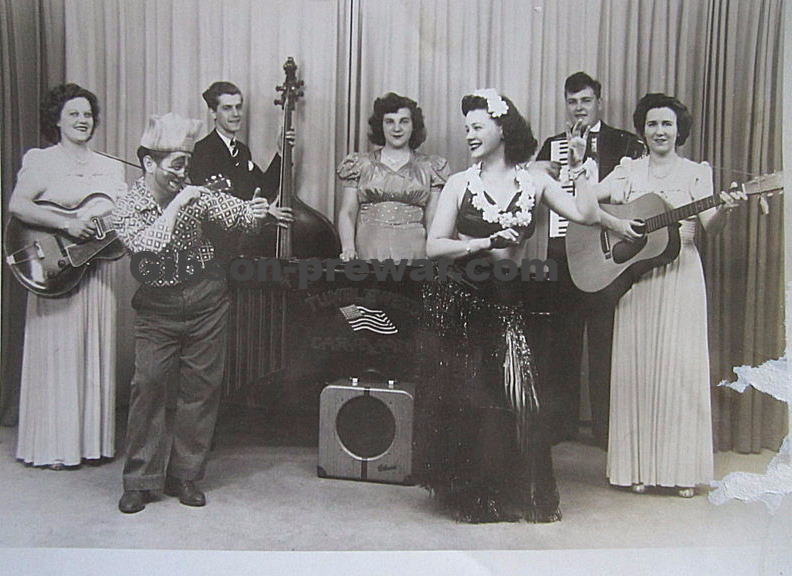 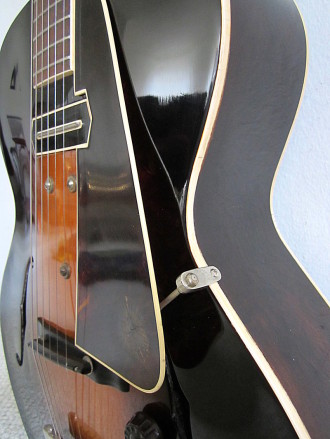 Nickel bracket mounting the pickguard to the body. 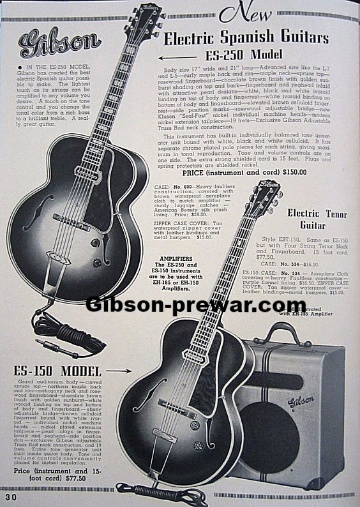 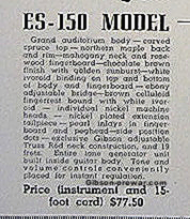 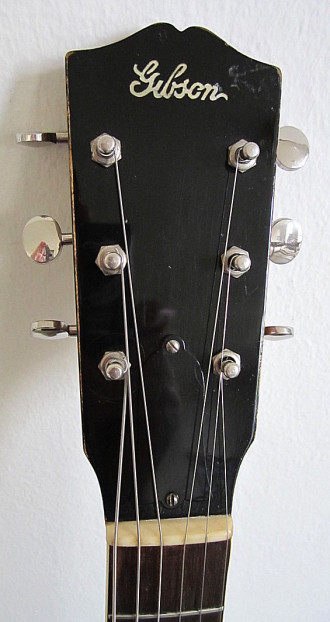 Plain headstock with no ornamentation and pearl 'Gibson' inlay. 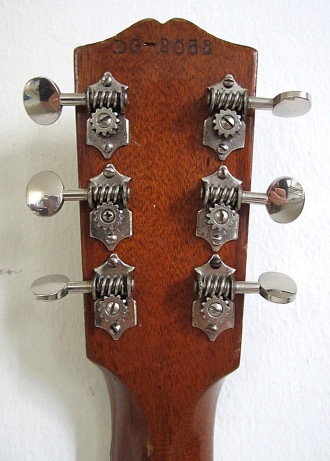 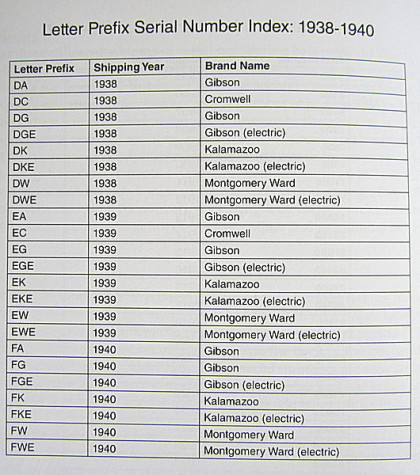 An interesting aspect of working on this site is the fact that I have the chance to photograph, document and write about the pieces in my collection. It is a continual state of learning (consulting Gibson books, literature and catalogs for facts).As I document, sometimes questions present themselves.

The above ES150, my first electric prewar Gibson, purchased from Elderly Instruments in Southern California was purchased as a refinish. All of the components (inside and out) are period correct for one of the first Gibson electric Guitars.

Joe Spann did notice this guitar on the site and stated, 'it is extremely odd that this guitar's serial number does not start with a three-letter-prefix, as would be correct for an original ES-150. The serial number should start with DGE, not DG.' He did consult the actual Gibson books and added, 'according to the original Gibson shipping ledgers DG-2053 (my guitar) was an ES-150 shipped on 14 April 1938 to Spence Music Company of Zanesville, Ohio in a #534 case.'

What is interesting is that Mr. Spann did note, for example another guitar, (serial number DG-2078) was a non-electric L-50 shipped on 10 August 1938 (according to the original ledgers). Both the L-50 and ES-150 have the exact same features, sans the electronics on the L-50. According to Joe Spann's chart above, my ES-150, stamped with DG-2053 (not DGE) may have been destined to be a regular L-50. However, since both L-50 and ES-150 are essentially the same, my guitar may have been pre-stamped with an L-50 serial number, but used as an ES-150. None-the-less, it is great to be able to include the facts on this guitar thanks to factual information from the original Gibson shipping ledgers. 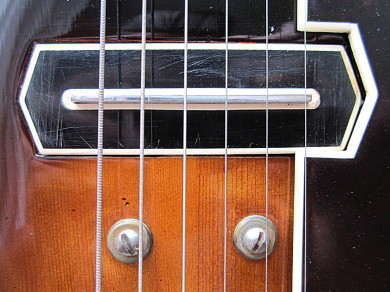 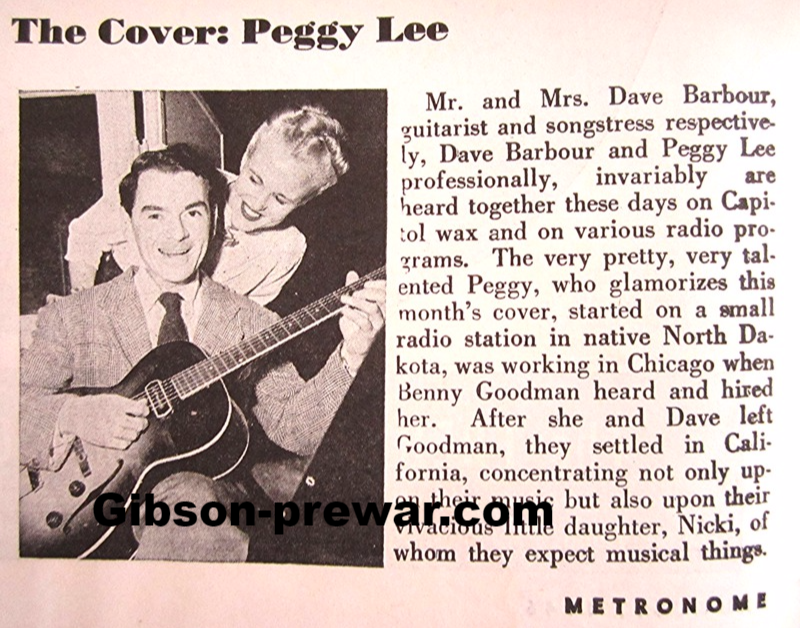 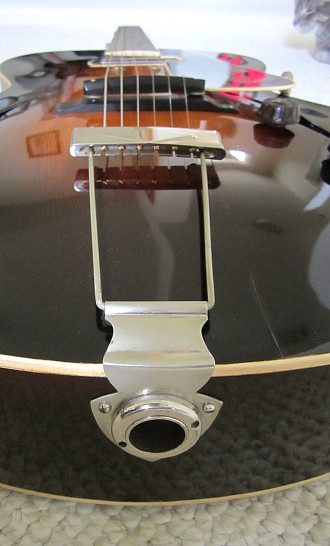 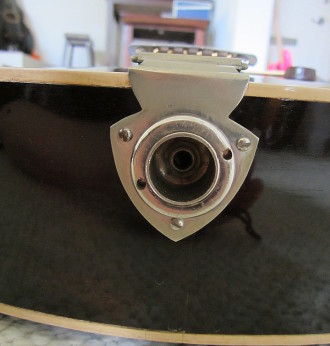 Base of tailpiece with input jack. 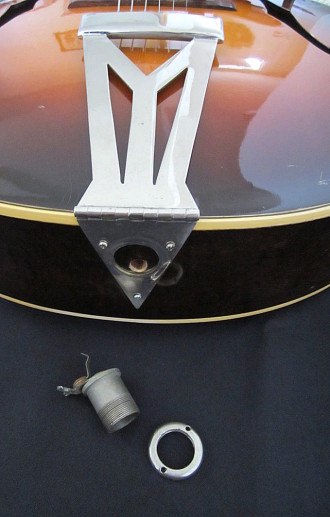 Single-bound maple back. Note the back is flat. Starting in 1940, the back was arched maple; note photo below. And yes, I just noticed my reflection in the guitar! 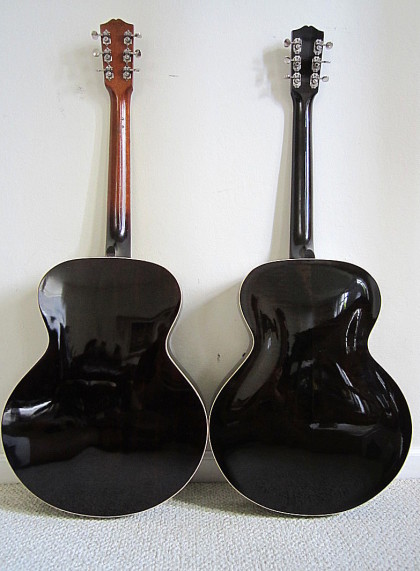 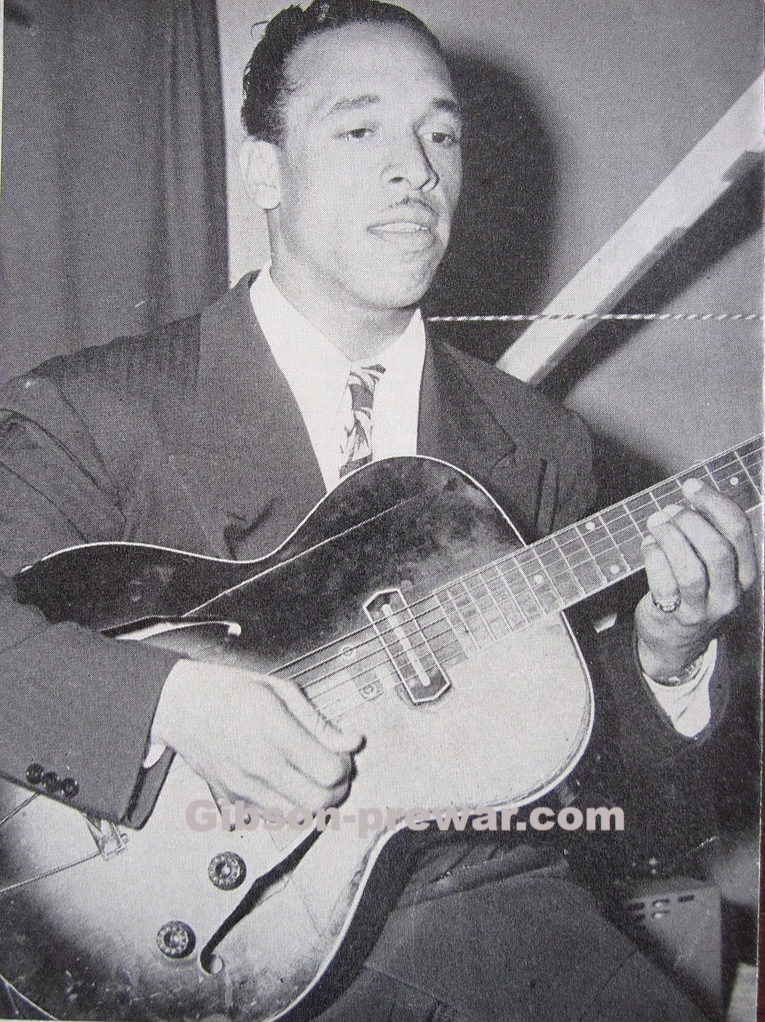 Interestingly there is a large crack on the top of this ES-150. Many surviving ES-150's have repaired cracks which is a very common attribute to these instruments. 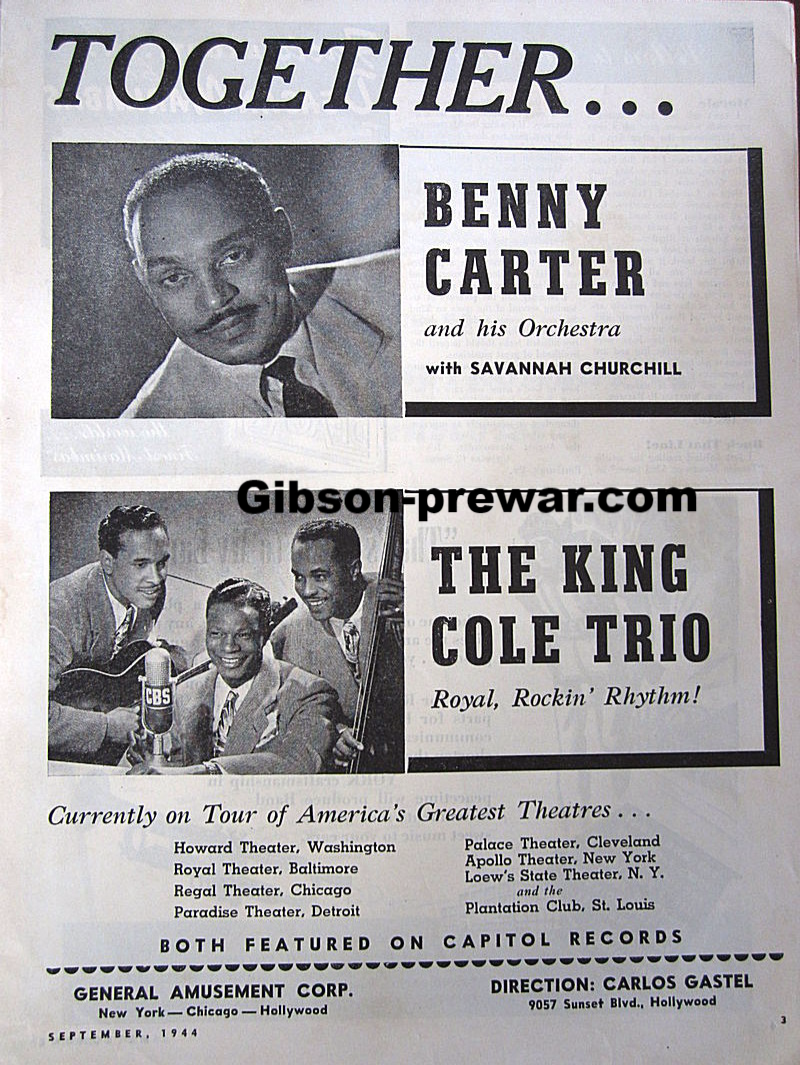 September 1944 ad for Benny Carter and The King Cole Trio.