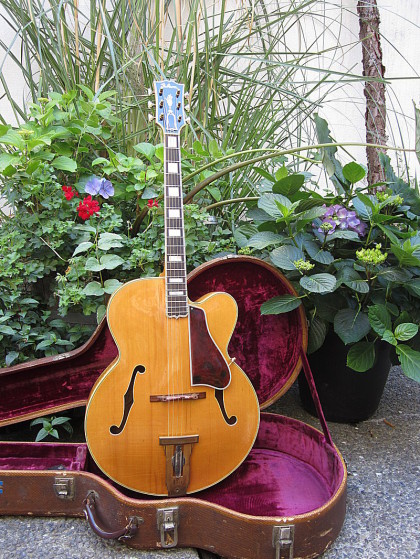 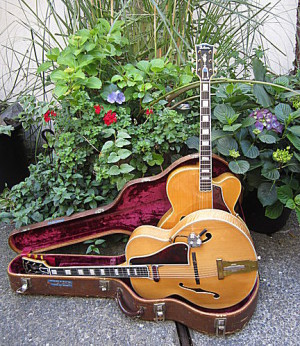 1939 was the year Gibson introduced the first cutaway models, namely the L-5 Premier and the Super 400 Premier. This was also the year that the sunburst tone Cermona Brown would take a backseat to the all new beautiful blonde finish.

Premier, or first, which after the war the name would change (most likely around 1947-'48)to cutaway, was given to describe something that had never been accomplished to an archtop before. The new cutaway would allow guitarists to reach the higher register on the fingerboard easily past the 14th fret. This instantly grabbed the attention of jazz guitarists and has forever become the standard for archtop guitars.

The L-5 Premier pictured here is one of my favorite pieces in the collection. Although it is very similar to my 1940 non-cutaway L-5, it has a much slimmer neck, the fingerboard is flat against the body(indicative of the very first L-5 Premiers and not floating like the later models) and is carved with so much thought to detail. Honestly, there are so many accolades written about these pieces that one tends to believe it is just hype.....I felt the same. Now, after getting one, I can truthfully say that the 1939 L-5 Premier is a carved masterpiece! 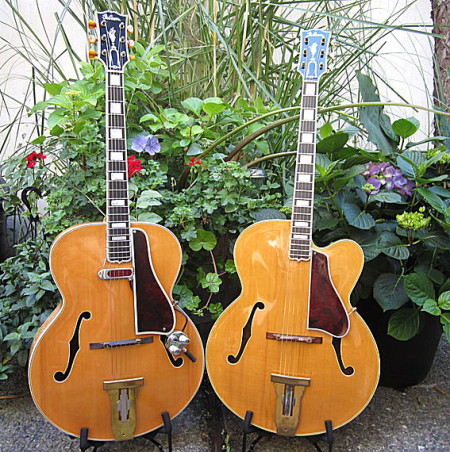 1939 & 1940 Gibson L-5's. The Premier cutaway and non-cutaway models were available in 1939. Natural, or Blonde finish was made available that same year. 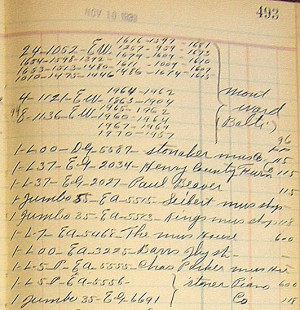 Because I had questions dating when this piece was made, I asked Mr. Lynn Wheelwright and he sent this photo of the original Gibson shipping ledger from November 10, 1939.

Looking at the ledger, one can see that this L-5 Premier's first home was Stoner Piano Co. in Des Moines, Iowa. It later found its way to a gentleman in Yuma, Arizona. After that, it went to Oregon where it spent 25 years until I recently acquired it. As with all of my prewar pieces, it is very interesting to discover the places where these pieces have been. 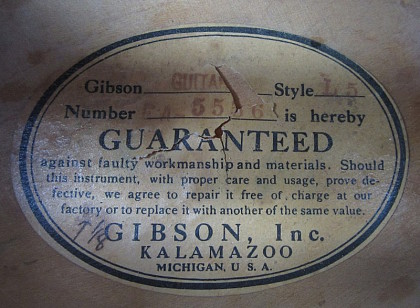 Serial EA 5556. Note the ledger above states this model was shipped from the Gibson factory November 10, 1939.

I also received input from Mr. Paul Fox on this piece. He had some great information about the first L-5 Premiers that were made around the time mine was. According to Mr. Fox, 'I believe the first L-5 P left the factory on 8/15/1939 with only a FON 2544, which was the first batch of these. They were designated "L-5 Cutaway" and Gibson salesman, Clarence Havenga got the first one.' 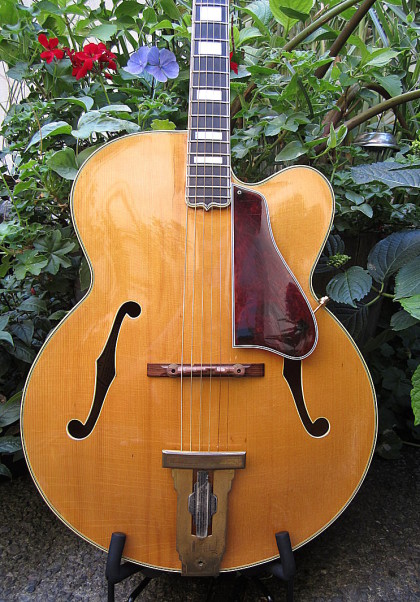 Because this is such a historically significant guitar; an introduction cutaway model that would change the body styles of all archtops thereafter, I wanted to note some facts that I found in Thomas A. Van Hoose's book, 'The Gibson Super 400 Art of the Fine Guitar'.

According to Van Hoose:

-The Premier was continued after WWII and was named Premier during 1947-1948, when it was renamed the L-5C

-1939 the natural, or blonde finish was offered as an option on the L-5 and L-5 Premier 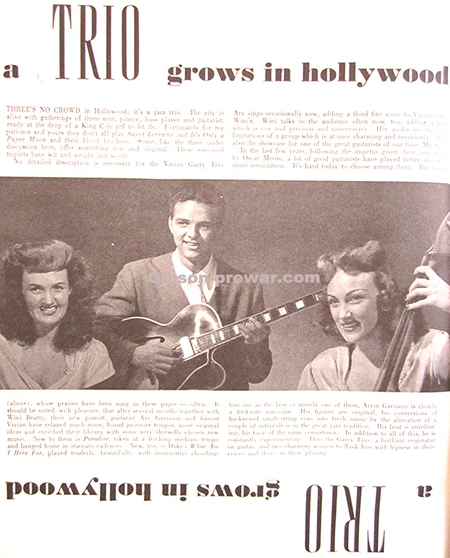 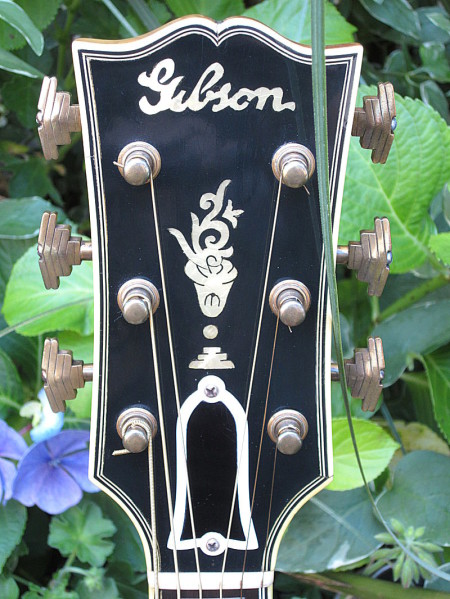 Grover Imperial Tuners. These tuners briefly made their way onto higher-end Gibson models from 1938-1940. They were an option for the buyer at the time and were short-lived by Kluson Delux Sealfast Tuners in 1940. 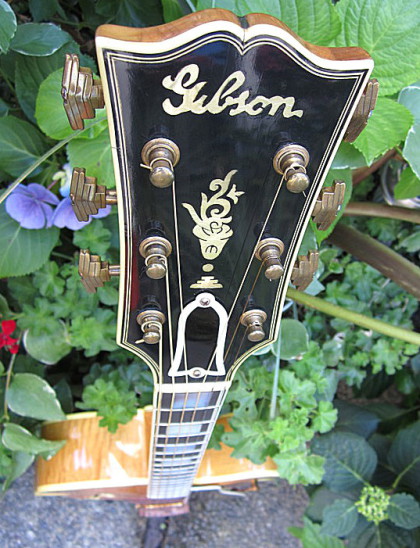 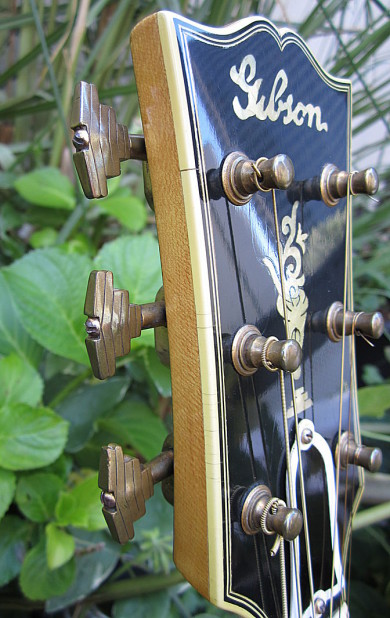 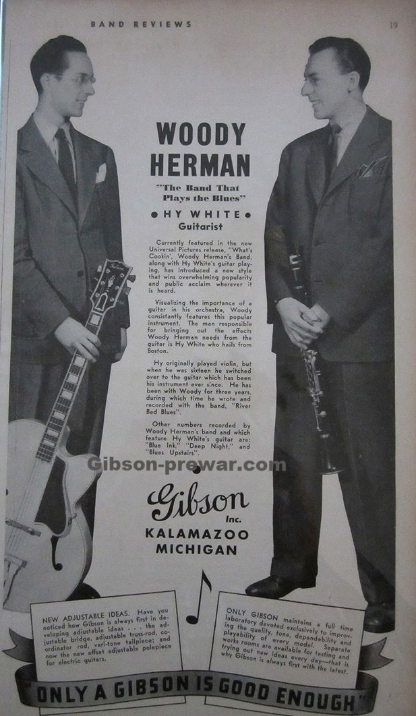 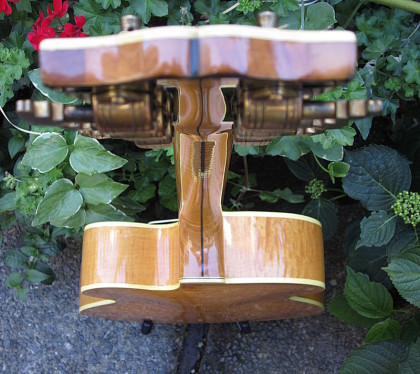 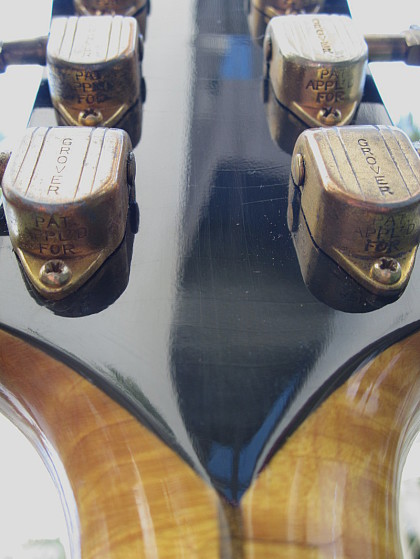 Note the 'PAT APPLD FOR' stamp on the underside of the Grover Imperial Tuners. 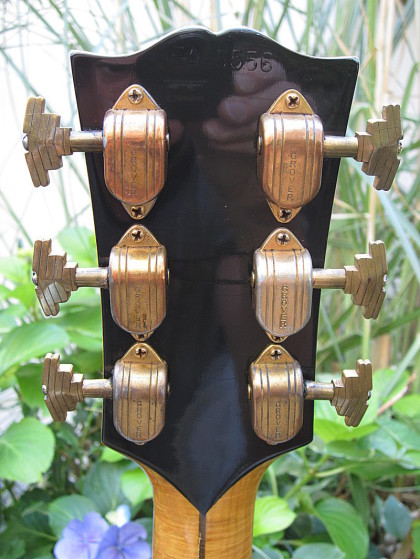 High-end Gibson models would sometimes have the serial number stamped on the back of the peg-head. Note the EA5556. 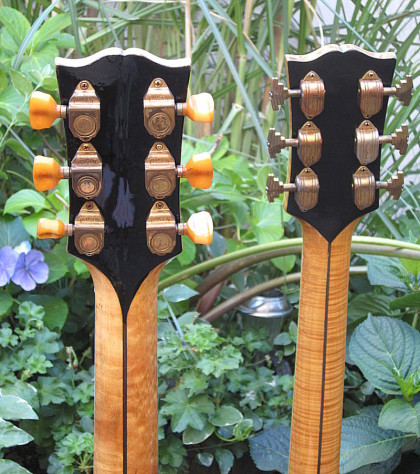 Grover Imperial tuners made their debut in 1938 and were an upgrade on higher-end guitars(Super 400 and L-5). The Kluson Catalin tuners (front) made a short appearance in 1940. Most Kluson tuners on L-5's in the early '40's had metal sealfast buttons. 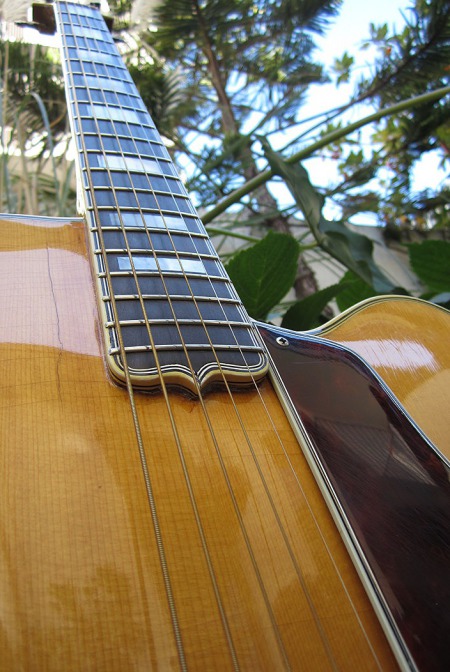 Note the very first L-5 Premiers had the fingerboard attached to the body. 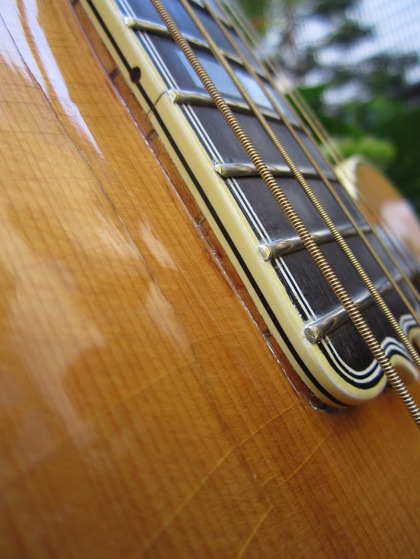 Soon after the 1939 L-5 Premier introduction, the fingerboard would be raised away from the body like all of the other Gibson archtop guitars. 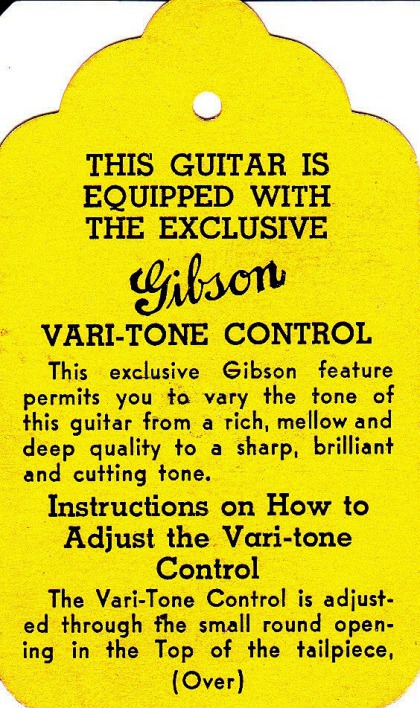 Introducing the new Gibson tailpiece with Vari-Tone for all Super 400's and L-5's in 1939. 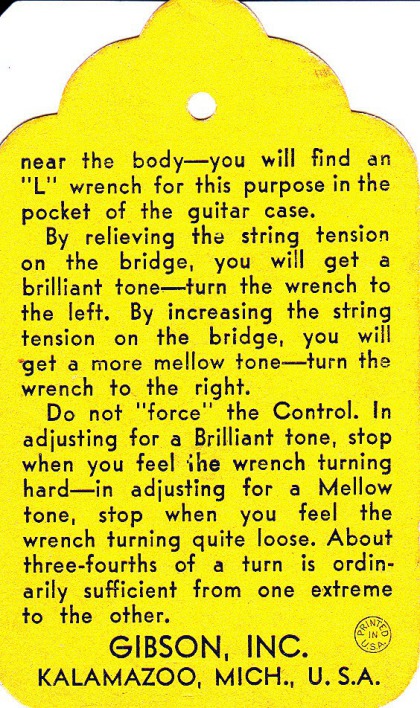 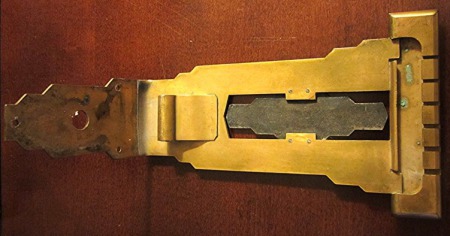 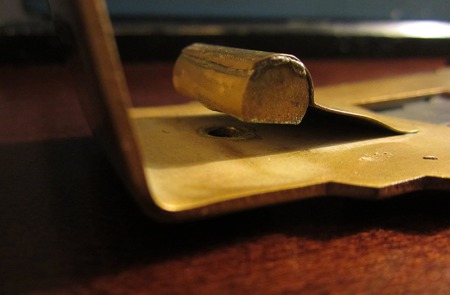 Note when the L wrench is inserted into the hole, the brass piece will press with downward force causing the tailpiece to slightly elevate. Thus, a little tone variation. 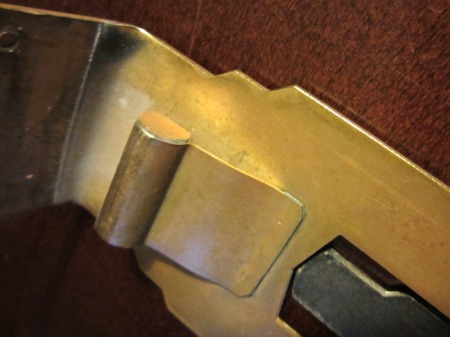 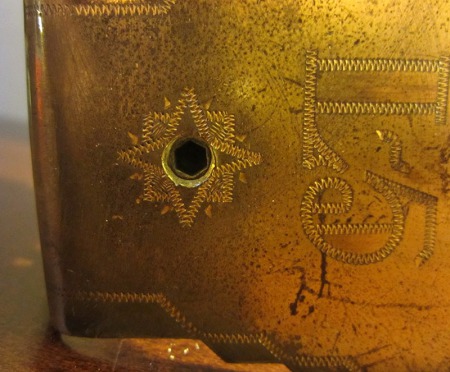 Note the hex nut that the L wrench will be inserted into (very vague outline of the nut in the hole). 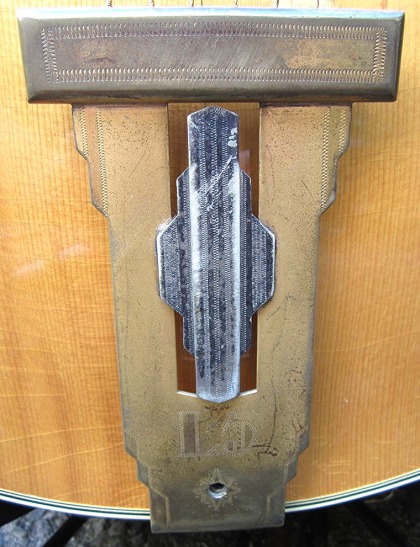 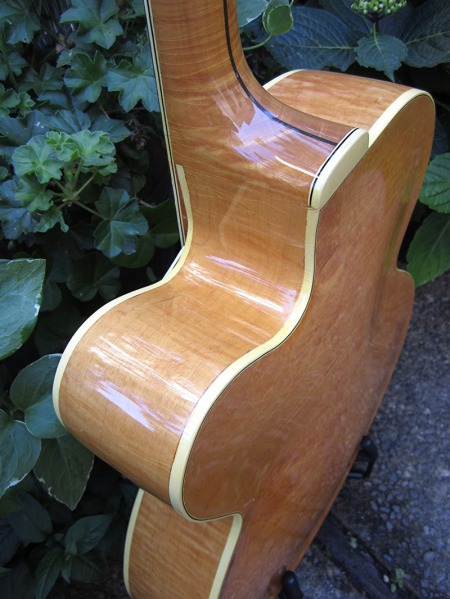 From all of the archtops that I have ever held or played, the craftsmanship of the first L-5 is by far superior to most guitars. Note the soft flowing curves on the sides and back above. 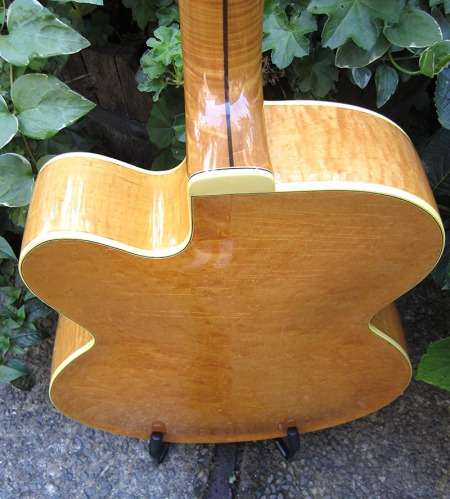 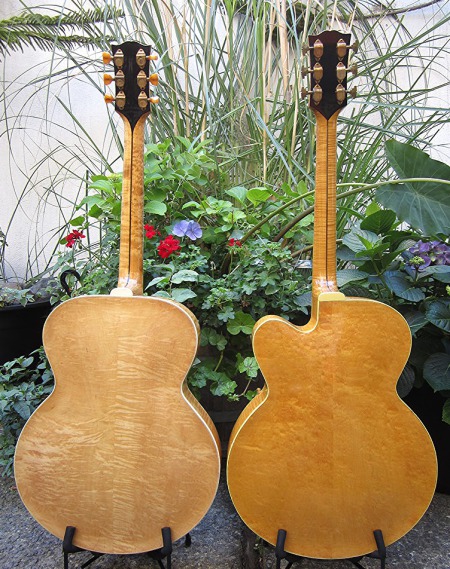 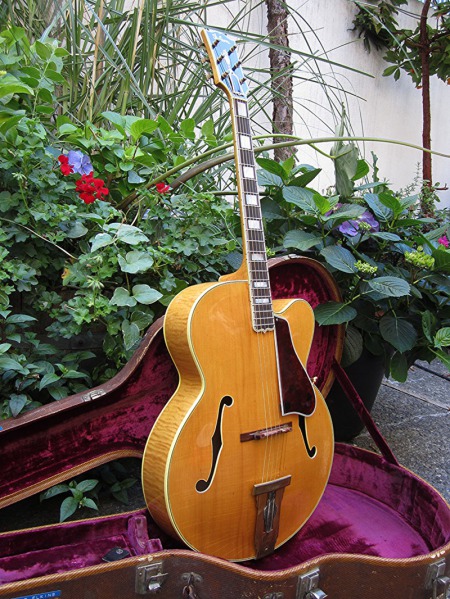 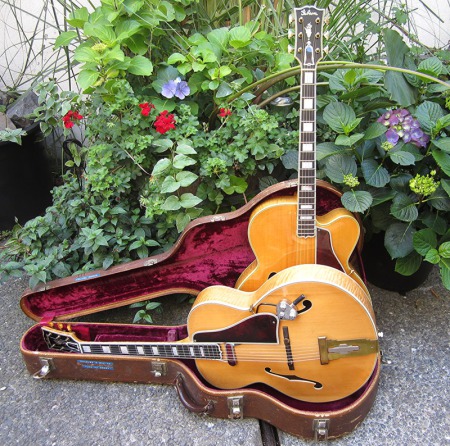