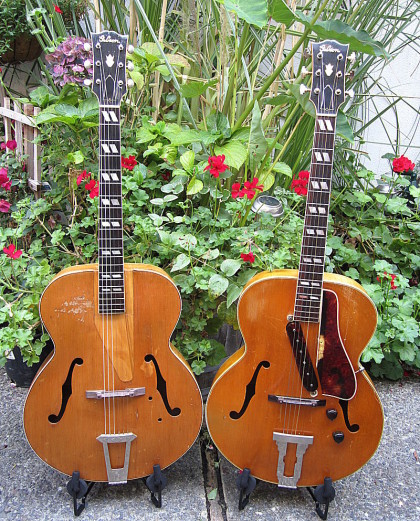 One of Gibson's electric advancements in 1940 was the introduction of the ES-300. This guitar featured a 17" lower bout and was primarily manufactured in the 'new' blonde finish(1939 was the launch of the natural blonde finish adding an extra color choice for the consumer besides the regular cermona brown).

The pickup that was installed in this electric version was a 6 3/4" unit and featured adjustible pole pieces. It used newer more powerful ALNICO magnets which were a step above the older 'Charlie Christian' design of the late 1930's.

This model also featured steel button Kluson tuners and a raised diamond nickel plated tailpiece. Around 60 units were produced thus making its appearance limited to only 1940. The larger pickup (slanted for more tone definition from the strings) was discontinued and replaced by the smaller slanted ALNICO magnetic pickup unit from 1941-1943 which was installed in the same ES-300 body (all electric models were discontinued circa 1943 due to metal rationing for the war effort). 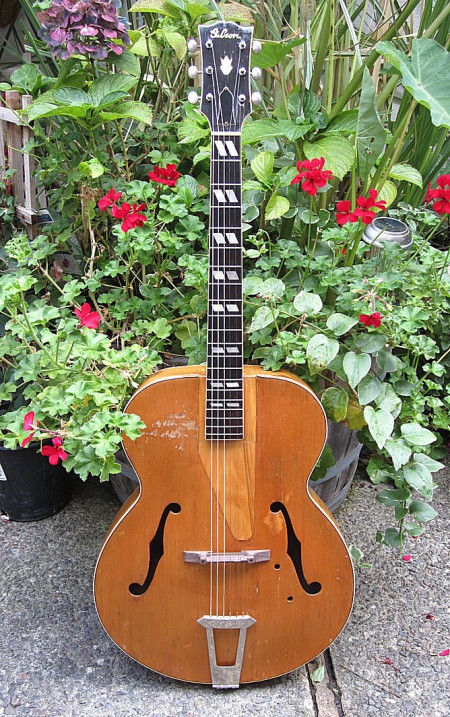 You will note a HUGE discrepency in this 1943 ES-300.....sometime in the past, the long pickup unit, pots and wiring were stripped. Because the history of prewar Gibson electrics is so rich, this is a piece that I could not pass-by. Yes, in this state, it is not playable, but the condition of the maple back, rosewood fretboard, pearl inlays, tuners, and tailpiece, it is great for comparison to the original which is also featured on this site.

According to most readings, the sound of the long slanted pickup is not very good(I am fine with it, however). Somewhere in time, someone stripped the old electronics and tried to make it into an acoustic L-7. The ES-300 and L-7 start with the exact same appointments, sans the electronics.

The history that I got from this piece goes something like this:

'This guitar was one of two that were passed on to me by my late guitar teacher uncle when he died. He had gotten it from his uncle, a noted guitar player (and character) in the NY-NJ area in the post war era. "The Uncle" as he was known in our family, had played with Burns and Allen among others, and was a bit of a 'hell-raiser'.

As with all of my Gibson items on this site, I am intregued with the history that surrounds these items. Although this guitar has seen 'better days', it started out as a 'state-of-the-art' instrument in 1940 and was once hailed as an electric achievement at the time. 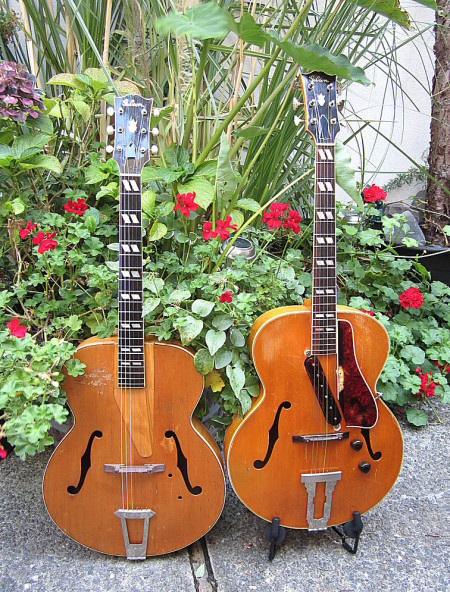 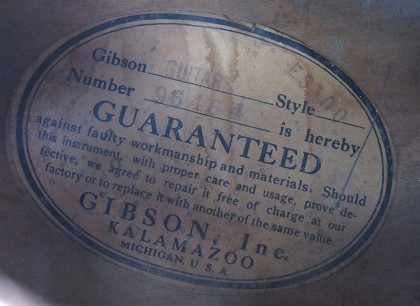 December 23, 1940 marks the date this ES-300 left the factory. The above information is from the original Gibson Shipping Ledgers provided by Lynn Wheelwright. This piece was sent with a matching EH 150 amp to a Mr. J. Pariso. 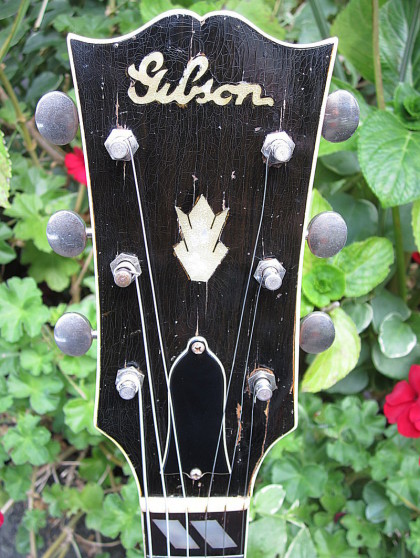 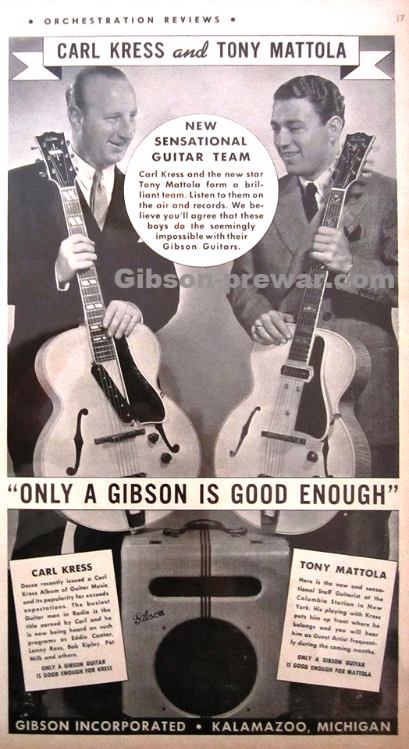 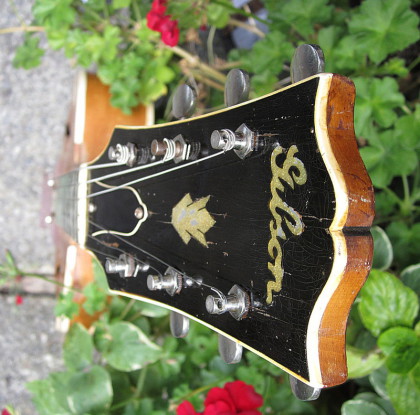 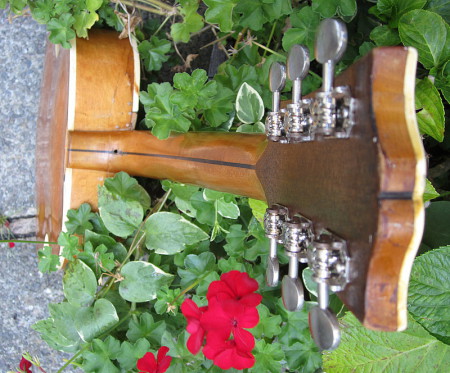 Gibson ES-300, 1940 with original Kluson tuners. Note the 3-piece maple neck and the single layer of binding that outlines the headstock. 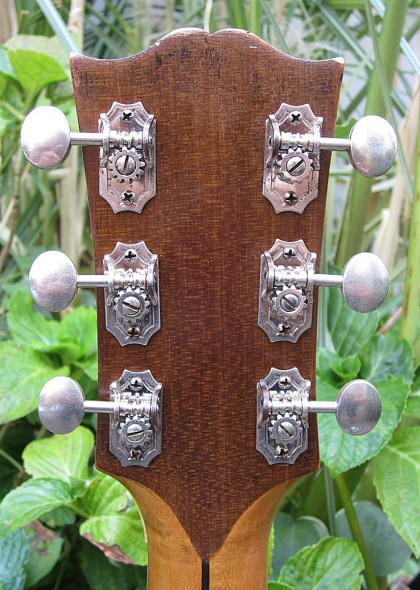 At some point in history, the black lacquer was stripped from the back of the headstock of this ES-300. 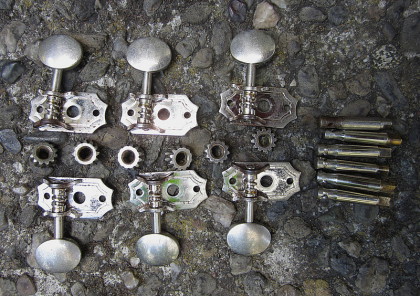 Original Kluson tuners. As with all of my prewar instruments, I spend a lot of time cleaning all of the original components. 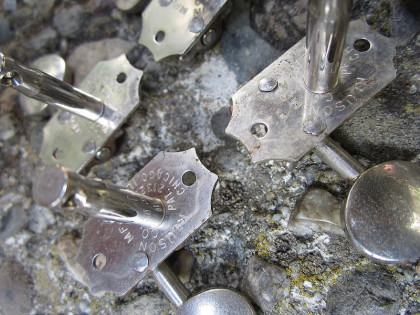 The name Kluson was stamped on the back of the individual tuners instead of the front like Grover tuners. 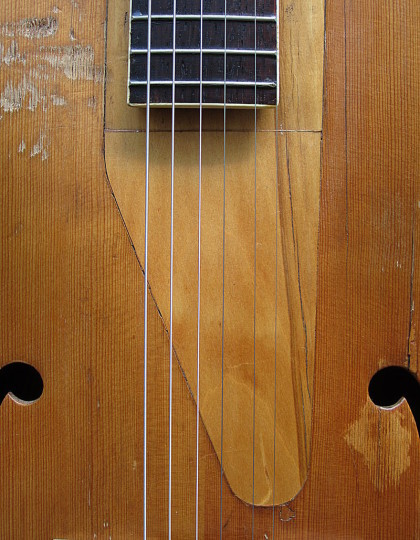 After the pickup was removed, someone very carefully fitted a piece of wood to take the pickup's place. Note the original curve and screw hole from the factory at the base. 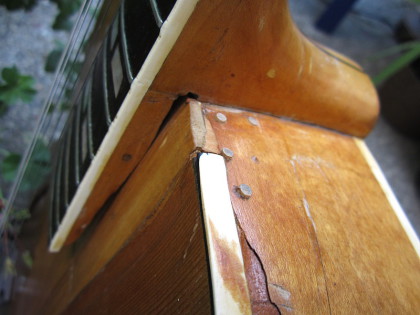 The neck is loose and wiggles, but the 3-layered binding is flush against the body. 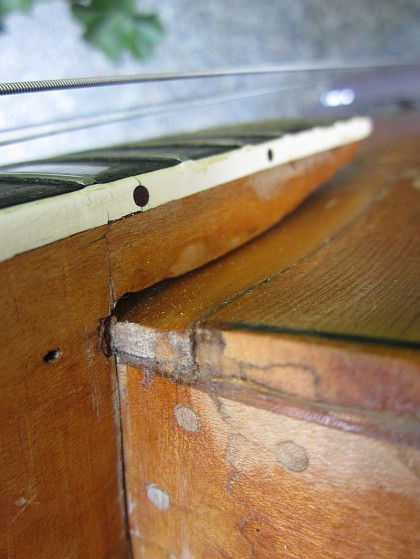 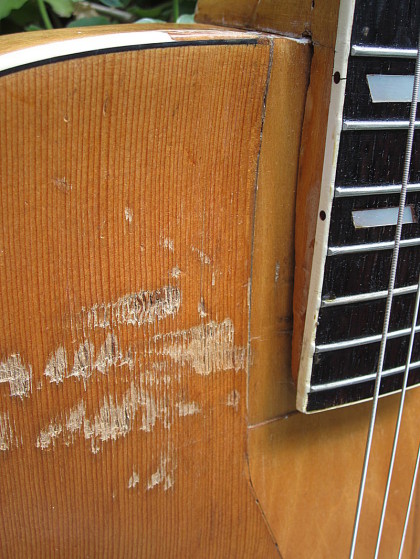 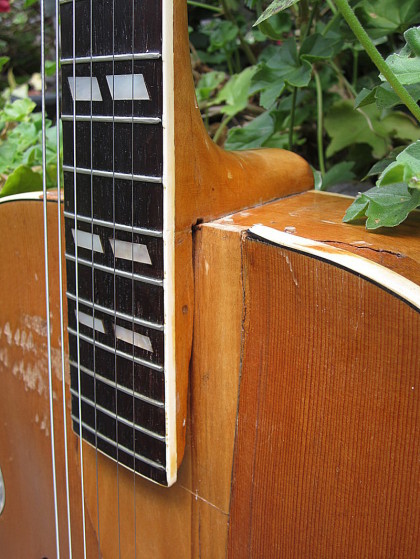 The original fretboard and inlays on this ES-300 are in very good condition. 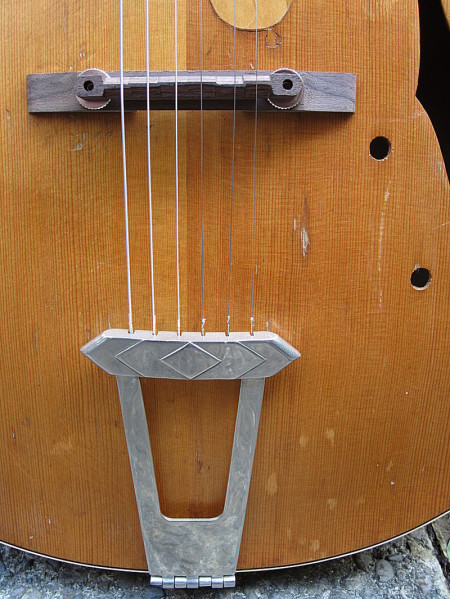 Original raised diamond nickel-plated tailpiece. These tailpieces were used between 1940-1943 on the ES-300 and L-7 models. 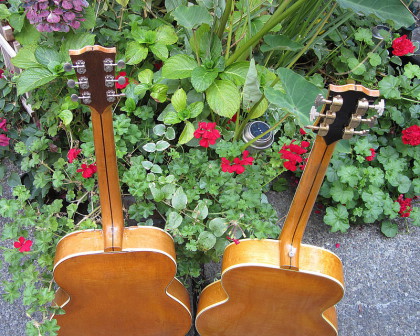 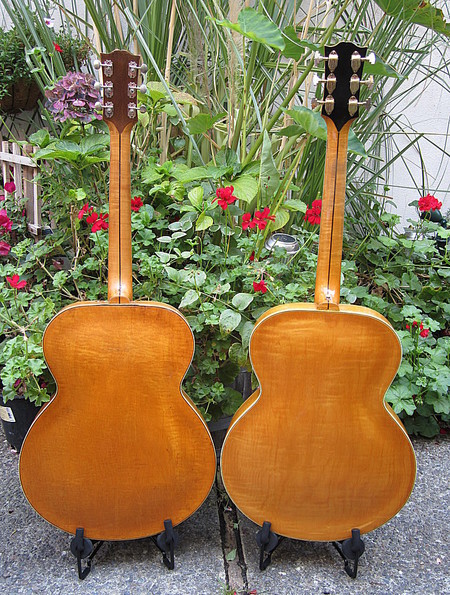 Both ES-300 have decent maple flame and are crack-free from the back. Both have outstandingly straight 3-piece maple necks. 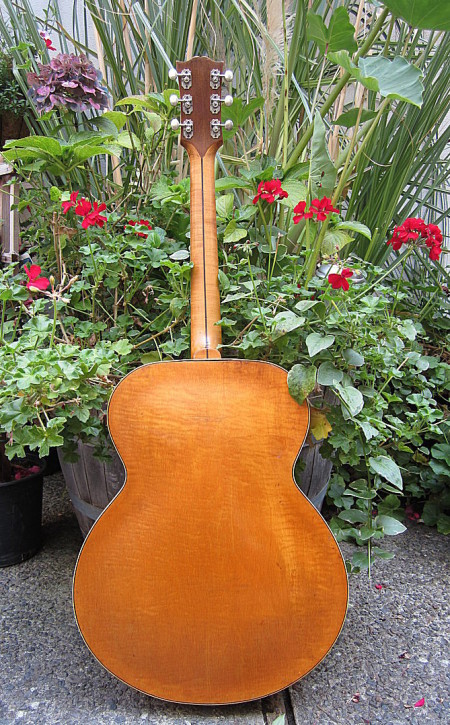