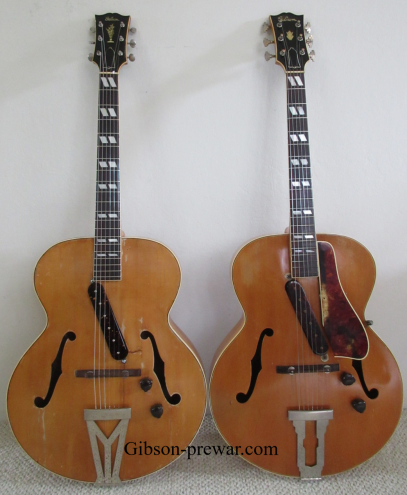 This page displays the transitional Gibson ES-250. Above, this 1940 ES-250 is pictured on the left, while the newer 1941 ES-300 is on the right. At first glance, these models are the same. Same spruce, maple and rosewoods. The nickel Kluson tuners would have been the same, except they were swapped with '50's Imperial tuners on the ES-300. The bakelite knobs are identical and all measurements are the same.

Most folks who are familiar with the short-lived ES-250 picture something quite different than in these photos. In 1938, Gibson was trying to make a higher end model, thus as in any industry, for a higher price. They took the basic stock L-7 and added more binding, changed the hardware, inlays and fixed-up the pickguard. The same CC pickup that was installed into the ES-150 of the time was used, as well. The end result was a much better looking electric guitar (the body was now increased to 17", as with the L-7's).

Well, evolution with the pickup was turning against the CC, and by 1940 the long slant P-90 was making it's debut. At first it was installed in the ES-250, but it was very short-lived. The long slant P-90 was dedicated to a different model named, the ES-300. During this point of the evolution of 250 to 300, the ES-250 was morphed several times over, as with this one. It has an L-5 torch inlay in the headstock. There are several variations of ES-250's in existence. It is still a rare model, but do not be surprised if you come across something different in a book, or online. 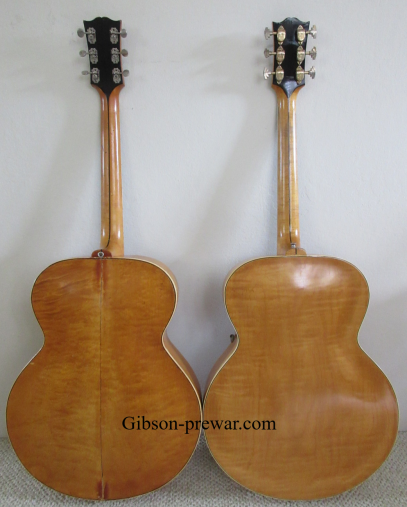