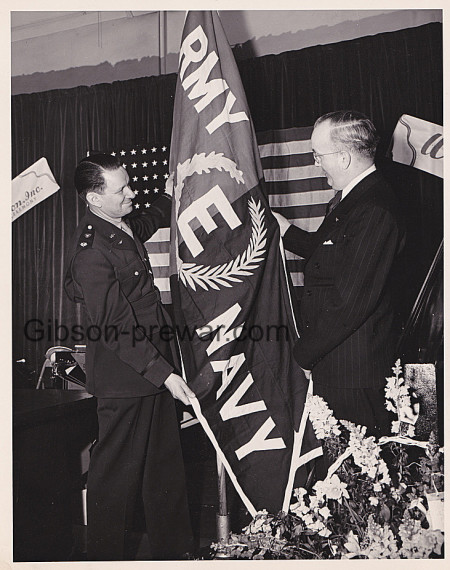 By 1942, Gibson, along with most major US factories became involved with the war effort. Most of the Gibson plant was converted into a workforce that worked in concert with many 'peacetime competitors' in order to manufacture military products such as electrical and mechanical radar assemblies for Zenith, RCA, and Western Electric to name a few.

Most of the Gibson workforce ceased instrument production and as little as 10-20% of the factory was actually dedicated to the manufacture of guitars. Due to a scarcity of metal, guitars were made with no truss rods and tailpieces incorporated wood to save metal.

Electric guitars and amps would be no-more until the war was over.

Although Gibson had to convert itself into a wartime machine, the company was awarded three coveted E Awards by the US War Department for participating with the war effort over the course of the war. 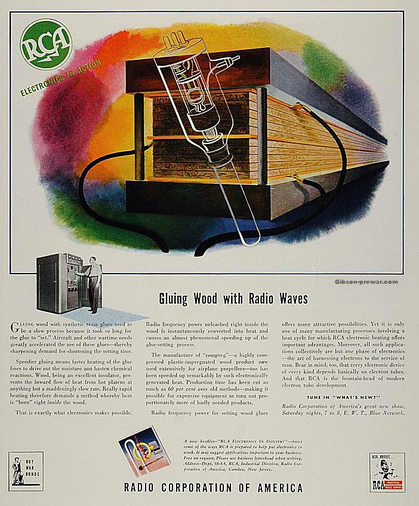 RCA ad for gluing wood with radio waves. A technological advancement, which after the war helped Gibson further its guitar manufacture with wood laminates.

By working with large outside contractors, such as RCA, as well as acquiring a larger workforce and using more advanced machines, the war effort would ultimately make Gibson more technogically advanced and boost Gibson's post-war achievements in guitar manufacturing.

One of my two original Army Navy E Award Flags. This flag was not from Gibson, but is identical to the one Gibson would have received. 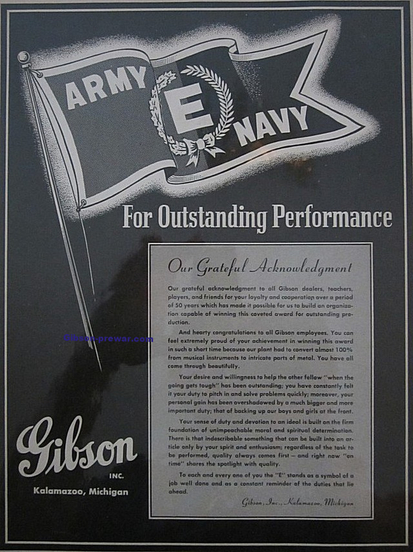 'Our grateful acknowledgment to all Gibson dealers, teachers, players, and friends for your loyalty and cooperation over a period of 50 years which has made it possible for us to build an organization capable of winning this coveted award for outstanding production.

And hearty congratulations to all Gibson employees. You can feel extremely proud of your achievement on winning this award in such a short time because our plant had to  convert almost 100% from musical instruments to intricate parts of metal. You have all come through beautifully.

Your desire and willingness to help the other fellow 'when the going gets tough' has been outstanding; you have constantly felt it your duty to pitch in and solve problems quickly; moreover, your personal gain has been overshadowed by a much bigger and more important duty; that of backing up our boys and girls at the front.

Your sense of duty and devotion to an ideal is built on the firm foundation of unimpeachable moral and spiritual determination. There is that indescribable something that can be built into an article only by your spirit and enthusiasm; regardless of the task to be performed, quality always comes first - and right now 'on time' shares the spotlight with quality.

To each and every one of you the 'E' STANDS AS A SYMBOL OF A JOB WELL DONE AND AS A CONSTANT REMINDER OF THE DUTIES THAT LIE AHEAD.' 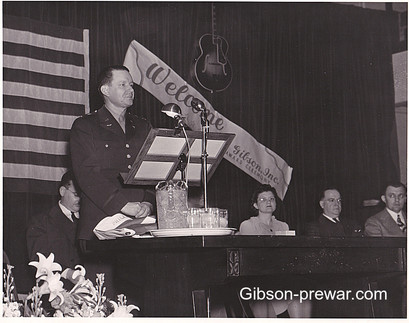 Original photo of Gibson Award ceremony for achieving the 1st of three Army-Navy E awards for participation in the war effort.

Original stamp for the Ward C. Morgan Studio on the back of each photo in this column. This was for ordering reprints of the awards ceremony. March 1944. 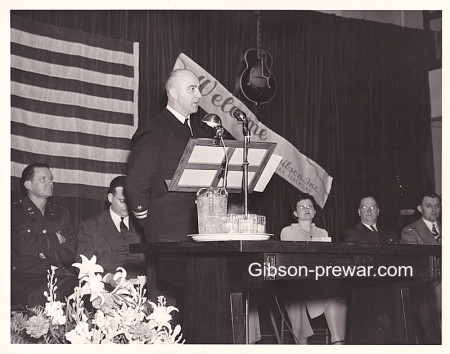 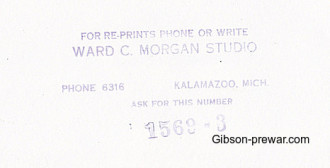 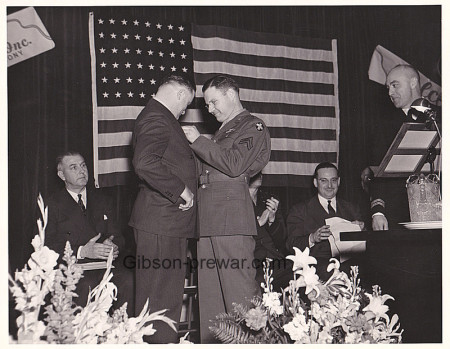 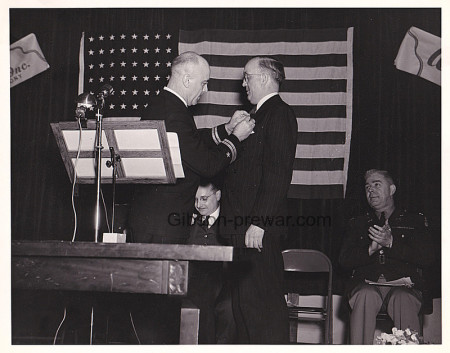 Guy Hart accepts the 1st of three Army-Navy E Awards for Gibson at an award's ceremony for participating in the war effort. March 1944. 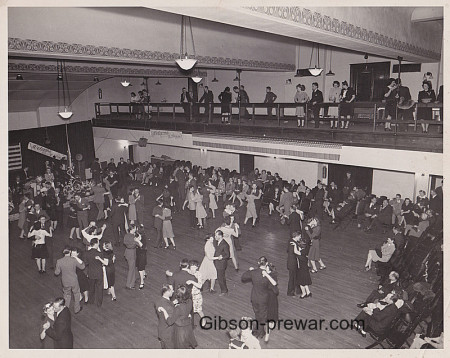 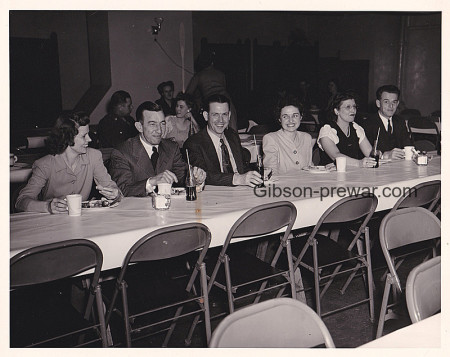 Enjoying a bottle of Coke at the 1st of three Gibson Army-Navy E Awards celebrations. 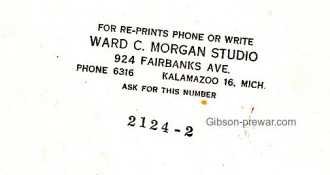 It is not very well known, but much of Gibson's guitar workforce during the war was made up of women. Most of the plant was dedicated to the war effort, but there were still a few hands creating Gibson guitars. Some of the women in these photos are wearing a ribbon that reads 'hostess'. Because these photos capture a very important awards ceremony, perhaps some of these women were not only involved in this gala, but perhaps worked on Gibson instruments throughout the war. 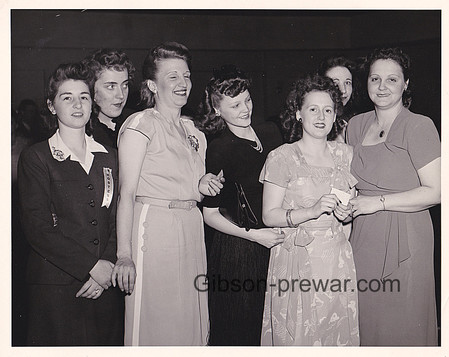 Many of the women pictured on this page wore a ribbon that read 'Hostess'. They may have also been part of the small workforce involved in Gibson's slim instrument manufacture while most of the Gibson factory was manufacturing product for the war effort. 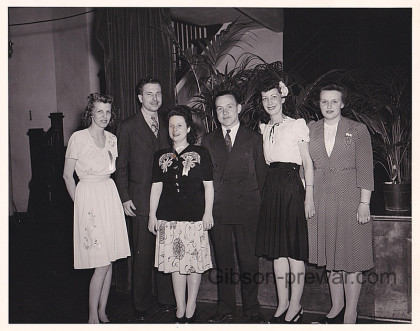 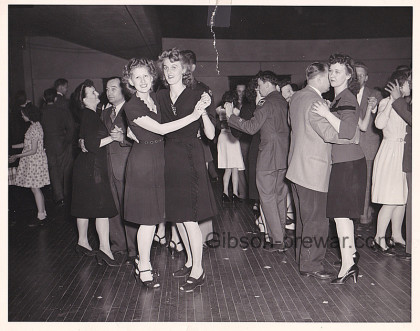 March 1944. Gibson's acceptance of the 1st Army-Navy E Award from the US War Department. 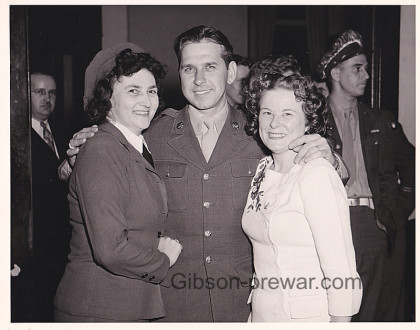 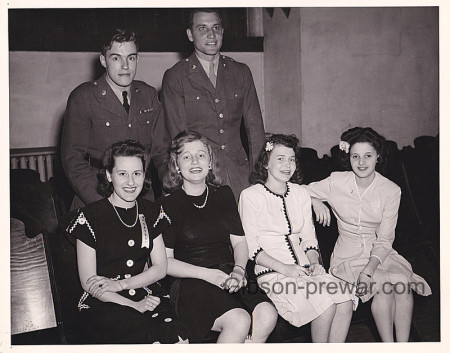 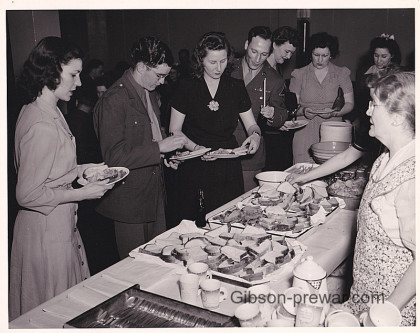 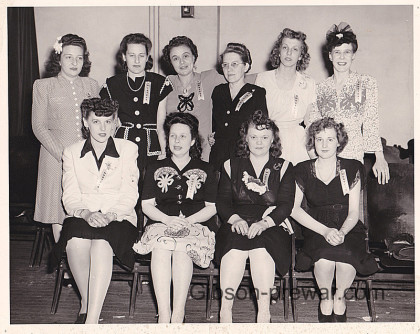 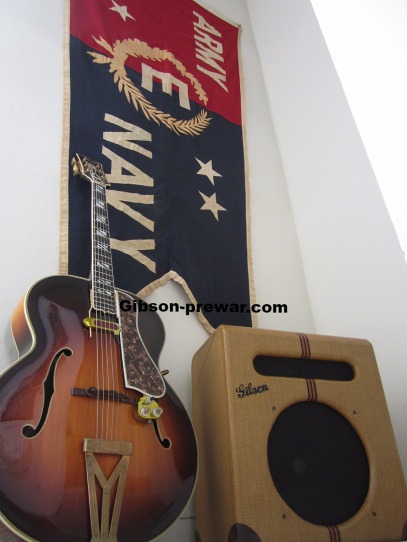 Gibson '37 Super 400 and an Army Navy E Award Flag. This flag was awarded to another company, but is identical to the flag Gibson would have been awarded.

Along with Gibson Inc., several other instrument manufacturers were awarded the coveted Army Navy E Award for their participation in the war effort. Martin Band Instruments, Frank Holton & Co., and Conn received several awards. Click the tabs below to view the pages of other E Award winners. (Most instrument manufacturers at the time would include the Army Navy E Award in the form of a small flag in their print ads in order to indicate their war accolades during the early 1940's).